The discovery in 2003 of the partial skeletons of 9 individuals on the island of Flores in Indonesia (containing only one complete skull)  and alongside stone tools dated to between 93,000 and 13,000 years ago, led to much excitement and ego-fights. Amid much controversy it was hypothesised – by some – that the remains came from a diminutive but separate species of humans (standing about 1.1 m tall), Homo floresiensis.

The time-line is simultaneous with the existence of the Denisovans (perhaps a little further north?), with the expansion out of Africarabia and also includes the Toba eruption (74 kyears ago). Of course it is possible that an isolated species survived on an island. But at this time during the glacial period Flores was probably no island but was joined to the mainland.

So my inclination is to go with these conclusions that the Flores bones represent a separate population, but not a separate species, of humans. 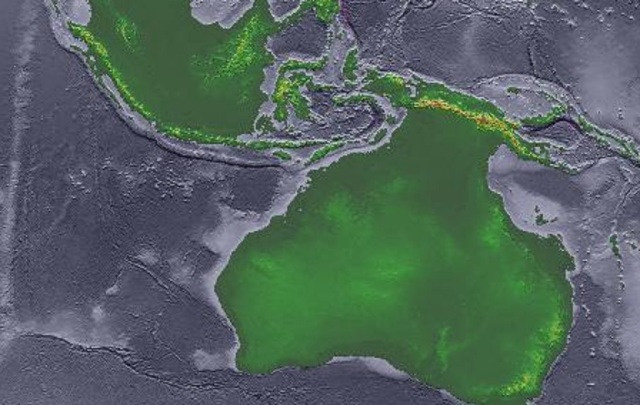 U. Penn press release: Initial descriptions of Homo floresiensis focused on LB1’s unusual anatomical characteristics: a cranial volume reported as only 380 milliliters (23.2 cubic inches), suggesting a brain less than one third the size of an average modern human’s and short thighbones, which were used to reconstruct a creature standing 1.06 meters (about 3.5 feet tall). Although LB1 lived only 15,000 years ago, comparisons were made to earlier hominins, including Homo erectus and Australopithecus. Other traits were characterized as unique and therefore indicative of a new species.

A thorough reexamination of the available evidence in the context of clinical studies, the researchers said, suggests a different explanation.

The researchers report their findings in two papers published Monday (Aug. 4) in the Proceedings of the National Academy of Sciences.

In the first place, they write, the original figures for cranial volume and stature are underestimates, “markedly lower than any later attempts to confirm them.” Eckhardt, Henneberg, and other researchers have consistently found a cranial volume of about 430 milliliters (26.2 cubic inches).

“The difference is significant, and the revised figure falls in the range predicted for a modern human with Down syndrome from the same geographic region,” Eckhardt said.

The original estimate of 3.5 feet for the creature’s height was based on extrapolation combining the short thighbone with a formula derived from an African pygmy population. But humans with Down syndrome also have diagnostically short thighbones, Eckhardt said.

Though these and other features are unusual, he acknowledged, “unusual does not equal unique. The originally reported traits are not so rare as to have required the invention of a new hominin species.” ….

This site uses Akismet to reduce spam. Learn how your comment data is processed.